One of my colleagues, a well-known expert in OCD, recently made a brave public announcement.  Before I share it, I want to explain one aspect that makes her so effective as an OCD therapist.  She herself suffered with debilitating OCD for many years and overcame it to live a full, productive life – and to help countless others do the same.  Open about her past, she is a role model to her both her patients and her colleagues. However, the joyous occasion of childbirth one year ago brought with it the surprising and unexpected return of her OCD. In this beautiful and personal article, Dr. Jenny C. Yip (PsyD, ABPP) describes her own experience with postpartum OCD and the work it took to triumph over it once again.

Pregnancy and childbirth can be times when Obsessive-Compulsive Disorder first occurs or reappears. OCD researcher and expert, Jonathan Abramowitz, Ph.D., ABPP, notes that “among female OCD patients who have given birth, pregnancy and childbirth are the most commonly cited “triggers” of OCD onset.” In addition, “a greater than expected percentage of women with OCD attribute the onset or worsening of their symptoms to pregnancy or the postpartum.”

Women with postpartum OCD may have intrusive thoughts (obsessions) that the child may die or that harm might come to him/her, she may fear harming the baby in some way, or she may fear that she doesn’t love the child enough. Rituals a postpartum woman with OCD might have include checking on the baby to be sure it is still alive, avoiding contact with the baby to avoid harming it, taking extra steps in caring for the child to “prove” she loves it enough, or praying or doing superstitious behaviors to avoid harm befalling the infant. While there are both biological and psychological theories about the causes of postpartum OCD, there currently is not a definitive explanation for it.

While we may not completely understand what causes postpartum OCD, we do know that the same treatments used for OCD that is not related to childbirth can be very effective. Those treatments may include Cognitive Behavior Therapy (CBT) with Exposure and Response Prevention (ERP) and medication. In CBT, a therapist works with the patient to identify the specific thoughts, images, or urges the patient is experiencing, as well as the behaviors (compulsions) the patient engages in to decrease their anxiety and discomfort. Then, the therapist works with the patient to develop a plan to confront the distressing thoughts and to gradually eliminate the compulsive behaviors. In Dr. Yip’s article, she describes some of the steps she took to overcome her OCD.

If you, or someone you know, is struggling with postpartum OCD, there is help. A therapist trained in CBT and ERP may be a good place to begin. There are also excellent resources and information available through organizations, such as the International OCD Foundation and the Anxiety and Depression Association of America.

This week (October 14-20, 2013) is International OCD Awareness Week.  Since promoting OCD awareness is a particular passion of mine, of course I’d like to seize on the opportunity to do a little educating.  Just what is OCD?  How does it present?  Is it treatable?

Let’s start with a little background about how many people have OCD.  It is generally thought that 1 in 100 adults has OCD and 1 in 200 children.  That’s 4-5 children in the average elementary school, and about 20 in a medium-sized high school.  Sadly, though, OCD is often under-recognized.   The International OCD Foundation notes that it often takes between 14 and 17 years from the first onset of symptoms until a person gets access to effective treatment.  Awareness of what OCD is can help to change that.

Simply put, OCD involves obsessions and compulsions.  Obsessions are intrusive, recurring thoughts that are unwanted by the individual.  They are associated with uncomfortable feelings and they interfere with important, valued activities.  Compulsions are behaviors or mental actions a person engages in to try to feel better or to make the obsessions go away.  Avoidance of things or situations that trigger obsessions can also be a compulsion.  Compulsions only provide temporary relief.  Common obsessions include fear of being contaminated, fear of causing harm to others, fear of losing control and fear of committing a moral offense.  Common compulsions include excessive washing and cleaning, constant checking that nothing was done to harm others or that no mistake was made, mentally reviewing events, repeating movements or activities until they are “just right,” seeking reassurance and confessing.

OCD can be extremely agonizing for those suffering from it – and for those who care about them.  It can result in lost productivity, lost opportunities and general misery.  There are, however, effective treatments that exist.  According to the International OCD Foundation, the key elements of treatment for most people with OCD are “one or more of the following:  a properly trained therapist, Cognitive Behavior Therapy and medicine.”  The Cognitive Behavior Therapy that has demonstrated the most effectiveness for OCD is called Exposure and Response Prevention.  It basically involves confronting the thoughts, situations, etc. that make the person anxious and then making a choice not to engage in compulsions.  While this may sound a little unnerving, the end effect is that the person learns to tolerate uncomfortable feelings and learns that they naturally lessen on their own.

There is no need for people to suffer with OCD symptoms in silence.  Education and treatment can provide the way to a more fulfilling and more productive life.  For more information about OCD, its symptoms and its treatment, visit the website for the International OCD Foundation or for the Anxiety and Depression Association of America. 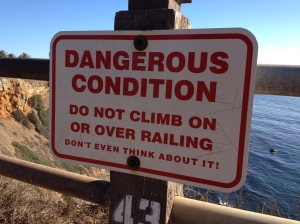 A little while ago, I took a walk in a park that was along the cliffs of the Palos Verdes Peninsula. The day was clear and the view was beautiful.  Except one thing kept popping up that disrupted my serenity.  It was a sign that read, “DANGEROUS CONDITION.  DO NOT CLIMB ON OR OVER RAILING.  DON’T EVEN THINK ABOUT IT!”

“Gee, thanks,” I thought to myself.  I looked to my companion.  “You know, I wasn’t even thinking about climbing over the railing and now I can’t get it out of my head.”

Indeed, my companion was having images of climbing on or over the railing, as well.  As if one warning weren’t enough, this same message was repeated on signs all along the cliff’s edge.  They were far enough apart so that, just as the image began to fade, we were admonished once again to “DON’T EVEN THINK ABOUT IT!”

“That sign is an OCD sufferer’s nightmare,” I commented.

Indeed, one of the hallmarks of Obsessive-Compulsive Disorder (OCD) is intrusive thoughts and images.  They are unwanted by the person, they cause distress and they won’t go away.  What’s more, they play themselves over and over in the person’s head.  It is these thoughts that make up the “Obsessive” part of OCD.

“Why Can’t You Just Stop Thinking About It?”

These are the words that many OCD sufferers hear from their well-meaning friends and loved ones – that is, if they are courageous enough to actually share that they are having unwanted, intrusive thoughts.  In fact, most people with OCD will tell you that they already have tried to stop thinking about it.  They may have put great effort into trying to make the offending thoughts and images go away.  So often, though, it seems that the harder they try, the stronger the thoughts.  How can this be?

If you had images in your head of climbing on or over a railing, you are not alone.  Our mind works so that when we struggle to try NOT to think about something, we tend to only think about it more.  I will sometimes challenge people in my practice not to think about a white rabbit.  Usually, they immediately begin to smile.  That’s because they get it.  That white rabbit popped into their head as soon as I said anything about it – and they realize the futility of trying to not think about it.

So, why can’t the person with OCD just stop thinking about an unwanted thought or image?  Because our minds just do not work that way.  It seems that we may do better if we simply do not try to fight away those unwanted thoughts, and instead go with them.  We may just find that, when we do not fight with those thoughts, they begin to fade away on their own.

If someone in your life is strugging with OCD, remember that they cannot simply stop thinking about their intrusive thoughts and make them go away.  There is, however, real help for managing these thoughts.  Your support and understanding about how very difficult it is to get unwanted thoughts out of their head may be that person’s first step toward getting help and moving in a positive direction.